Mediterranean diet is often regarded as one of the most effective weight loss programs, but it is much more than that. The word “diet” comes from the Greek “diatia” and Latin “diaeta” which stands for ‘lifestyle’, meaning –‘taking care of health and regular lifestyle through proper nutrition, physical activity and adequate rest’. Mediterranean diet has been the subject of numerous medical studies for decades and they all report it has a beneficial effect when it comes to boosting the immune system, prevention of cardiovascular diseases and certain tumors and it is also related to slow skin aging.

The Mediterranean diet was first described in the y. 1945 by an American scientist Ancel Keys (1904 – 2004) during his stay in Italy. However, it did not become popular until some 50 years later. In 2013 UNESCO 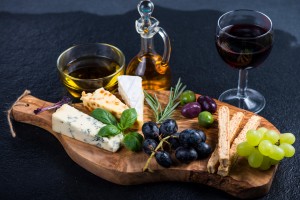 added the Mediterranean diet on the list of “intangible” cultural heritage of the countries – Croatia, Portugal, Italy, Spain, Greece, Cyprus and Morocco.

The Mediterranean diet is featured by healthy foods like fresh seasonal fruits and vegetables, fish and the sea food, extra virgin olive oil, unrefined cereals and legumes. What should also be taken into consideration is the way these foods are prepared, since the emphasis is placed on using steaming as a cooking method, which means that foods should be only minimally processed. The Mediterranean diet is poor in red meat, refined sugar and highly saturated fats that increase the risk of cardiovascular diseases and some tumors. Yet, increased consumption of red meat and fat in certain regions of the Mediterranean countries, equal to the one in the U.S., was also a subject of numerous studies which showed lower rate of cardiovascular diseases than in other Mediterranean countries despite increased consumption of red meat. This later became known as a paradox of the Mediterranean diet, since it turned out that the intake of fruits and vegetables (antioxidants) and olive oil (unsaturated fatty acids) is far bigger in these regions than in the U.S. suggesting this is exactly what decreases the risk of cardiovascular diseases. According to the pyramid of the Mediterranean diet, seasonal fruits and veggies should be consummated 5 times a day.

Unfortunately, western eating habits have given way in our country as well, and all that brought to an increasing number of people suffering from heart diseases, various cancers or chronic diseases. Therefore, if you opt for a healthy diet or effective weight loss program, the Mediterranean diet could just be perfect for you.

In addition, basic principles of the Mediterranean diet include consumption of 1.5-2 liters of water a day which helps eliminate toxins from the body and also slow down the aging process. Moreover, one glass of red wine and at least 30 minutes of exercises 3 times a week should be a part of this lifestyle. You can also have tea, coffee and natural juices without added sugars and avoid all drinks high in free sugar. It is recommended to have 3 main meals a day and 2 snacks and, if it is possible, to eat meals at the same time every day.

Breakfast is the most important meal of the day and thus, should not be skipped. It should contain 20 % of your total daily calories. For a morning snack you can eat fruit or Greek yogurt, whatever you prefer, but if you prefer

fruit yogurts, it would be better to make it yourself using fresh fruit and Greek yogurt instead of eating fruit flavored yogurt you normally buy in a store which is loaded with sugar.

An ideal choice for lunch would be pasta or rice, some 80 g of pasta with fresh tomatoes, mozzarella cheese, basil and a teaspoon of olive oil or chicken salad enriched with fresh tomatoes, feta cheese, tuna and black olives. For the afternoon snack, you can have a small pack of crackers and fruit or tea and wholemeal biscuits.

Dinner should be light making sure that the last meal is taken at least 2-3 hours before going to sleep. You can make a fresh fish salad or steamed vegetables with some white meat.

If you want to lose some weight, you need to pay attention to the amount of food you eat during day. Herbs and spices like basil, sage, rosemary, olive oil and garlic significantly add flavor to traditional Mediterranean recipes. All in all, Mediterranean diet shows us there is no need to eliminate any food to keep our body healthy and vital, but how much and how often we eat certain foods is another story. Precisely for being dynamic and versatile, the Mediterranean diet is ideal for those who look to lose weight without sacrificing anything.